From Fairhill, to Badlands, and back again

The 80s and early 90s:
Local activists inspire a non-profit

The new Fairhill Meetinghouse at Germantown and Cambria was built in 1887 to replace the first meetinghouse from 1703 when the city grid reached Fairhill.  Busy factories employed generations of immigrants who built great churches and saved money to move farther out.  In the 1960s and 70’s  the factories closed and jobs moved away. As Black and Latinx people moved in, Whites moved out.  Quakers moved away from Fairhill and in 1985 the meetinghouse and the burial ground were sold.

By the late 1980s, the burial ground had become neglected and overgrown. It became a dumping ground filled with abandoned cars and trash. It became a blight on the community. Drug dealers had taken over much of the neighborhood and people used the grounds as a place to use. In his book, Third and Indiana author Steve Lopez described the neighborhood as “The Badlands”.

In 1992, the Philadelphia Yearly Meeting received a call from neighbor Elizabeth Gutierez, asking the Quakers to come back to clean up the site.

Margaret Hope Bacon, Quaker biographer of Lucretia Mott called Friends to come help clean up the 4.5 acre site. They formed a committee, then a non-profit corporation, and were able to raise the money to buy back the burial ground by 1993. 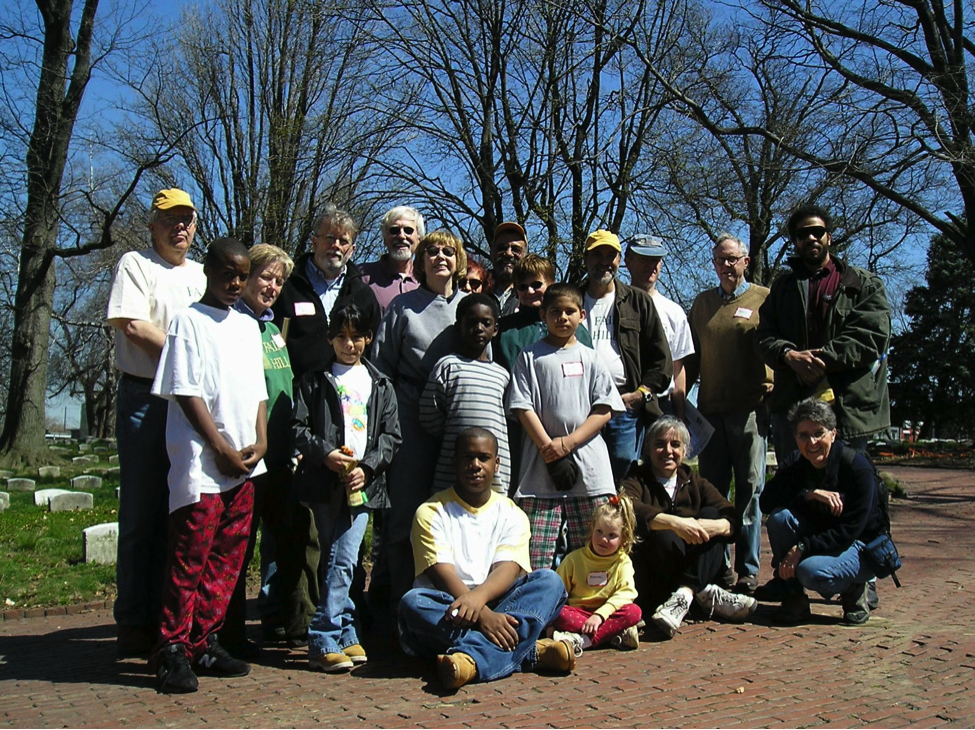 The 90s: Reclaiming the land,
rebuilding the neighborhood

Dozens of Friends from Philadelphia Yearly Meeting met monthly in good weather for two years to cut brush, prune trees, pick up trash, weed and collect damaged headstones. They were determined to restore the burial ground to its former peaceful beauty. By 1995, the land had become manageable enough for regular mowing.

Peaches Ramos, 9th St. block captain, was galvanized to action when two teenaged friends of her children were killed on the corner. Neighbors were reluctant to cooperate with the police for fear of retribution, so Peaches took the new captain Thomas Nestel door to door to meet residents and ask for their help. Peaches organized shifts of neighbors day and night to vigil at the corner of 9th and Indiana.

With this partnership, Operation Sunrise was able to clear the open air drug market. Crack houses in the neighborhood were condemned and torn down.

The newly formed Fair Hill Burial Ground, Co. joined forces with neighbors and the police. When vandals repeatedly stole sections of historic iron fence and bricks from the sidewalk, neighbors went to court with Mary Anne Hunter to prosecute. Signe Wilkinson publicized the theft in the Inquirer, and the contractor who had been buying stolen bricks paid to rebuild the sidewalk.

Jane Golden and the Mural Arts painted eight great wall murals within two blocks telling stories of the struggles for justice in Philadelphia over 300 years. 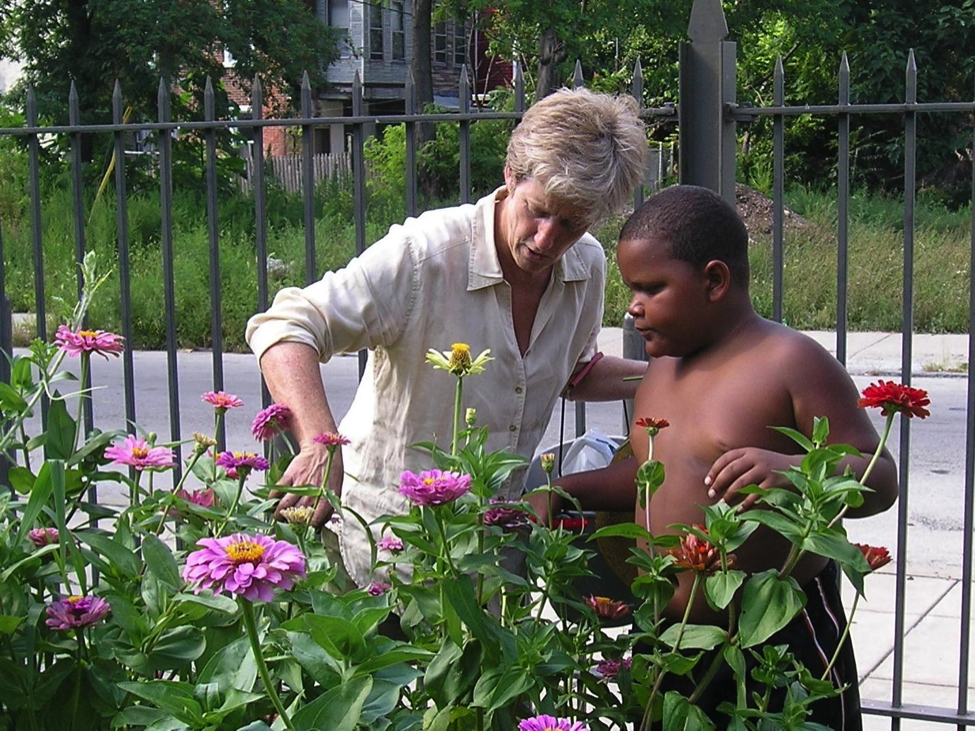 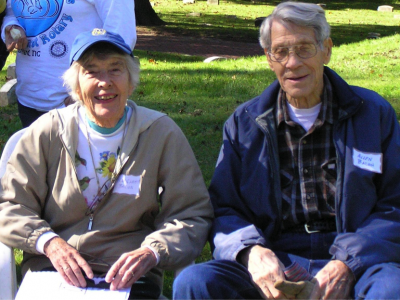 In 2003, after ten years of restoration, volunteers and neighbors celebrated the 300th anniversary of the Fair Hill Burial Ground with re-enactors playing the parts of William Penn, Lucretia Mott, and Robert and Harriet Purvis. In 2004 the board began to consider how to put this precious place to work to honor the great reformers and activists buried here.

Their mission to carry forward the work of the Quaker reformers buried at Fair Hill included George Fox’s wish for a place for children to play and grow plants in the garden. A small garden was built, and over time, empty lots around the grounds were turned into vegetable gardens and fruit orchards.

In 2006, FHBG joined the ‘Shared Prosperity” project of neighbors and Village of Arts and Humanities, funded by Wachovia Bank.  The needs assessment called for more green spaces, and. FHBG agreed to help with community gardens and replanting of street trees. They saw that gardens produced more than vegetables. They were a way to bring people together and re-weave community trust and cooperation.

Since youth were key to the revitalization of the neighborhood, the Quakers asked the schools how they might be of service. The schools asked for books.  FHBG asked Quaker schools and Meetings for gently used children’s books, and thousands were donated every year. By 2018, over 45,000 high-quality children’s books had been donated to Fairhill schools and children. The school principals asked for people to help support reading, and Reading Buddies was started. The literacy program currently has 30 reading volunteers going weekly to Julia deBurgos School in Fairhill. 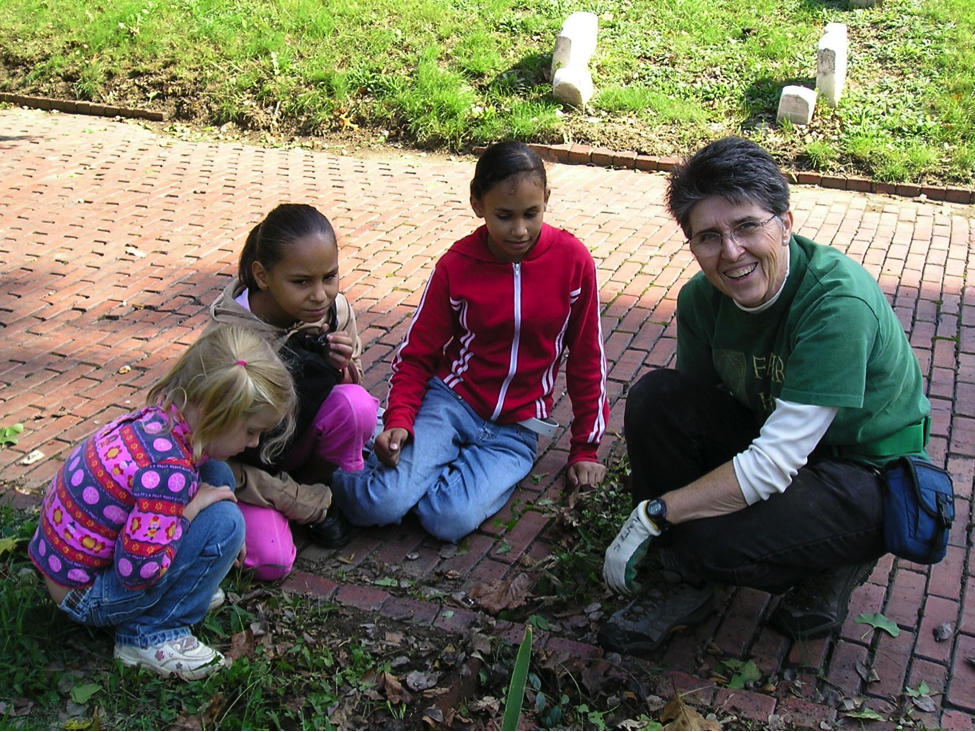 In 2009, the board changed its name to Historic Fair Hill and completed he Indiana entrance with cobblestone drive and brick oval. Each year, the gardens grew, and more neighbors participated in community building events.  With the beautiful, five-acre greenspace as an anchor, neighbors fixed up their houses, the city began to build on the vacant lots, and property values increased. New developments such as the Evelyn Sanders townhomes, Hannah House, the Warnock Village Senior Housing, and Philadelphia Housing Authority offices all moved to the neighborhood.

In 2015, began opening school libraries that had been closed in 2009.  Now, in 2021, HFH supports libraries and gardens in four Fairhill schools with bilingual coordinators. It employs bilingual mothers as classroom assistants and employs a team of three gardeners to manage six community gardens. HFH works with community partners and volunteers to carry on the work of the reformers who came before us and bring more justice, equity and peace to Fairhill. 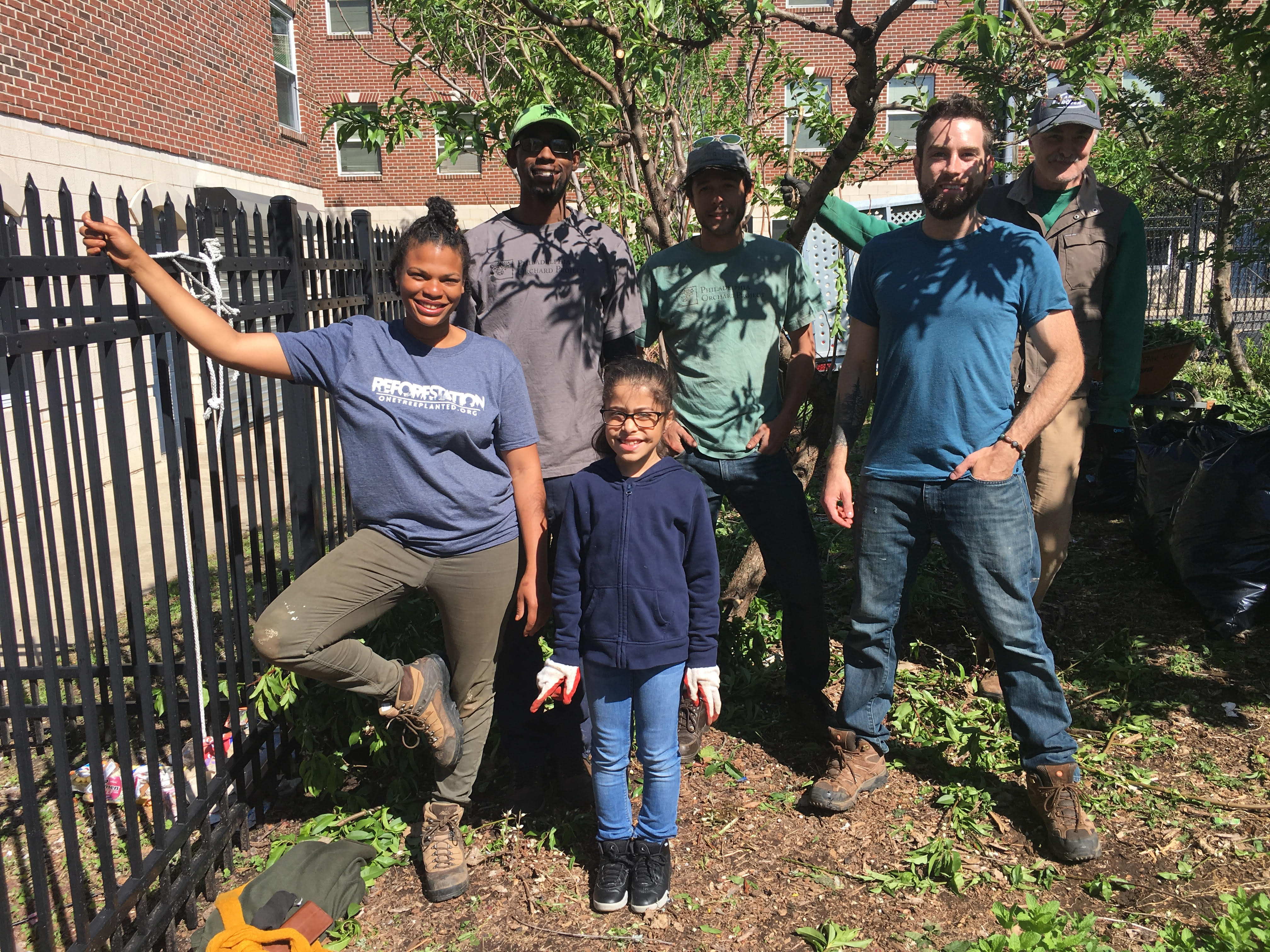