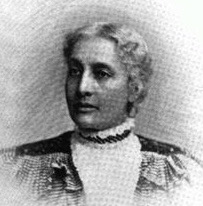 Harriet Forten Purvis was a founding member of the Philadelphia Female Anti-Slavery Society, and for many years the chief organizer of the annual Anti-Slavery Bazaars held in Philadelphia to raise money for the cause. She was also a supporter of the women’s rights movement.

Harriet was the daughter of James Forten, a wealthy black sail maker and philanthropist in Philadelphia, and his wife Charlotte Forten, also active in the anti-slavery movement. She and her sisters were privately tutored, and became active in founding a Female Literary Society. In 1831 she married Robert Purvis. The couple had eight children, but Purvis was wealthy enough to employ a governess, and Harriet was able to accompany her husband to many anti-slavery conventions, and to participate fully in the movement. The Purvises also entertained many of the leading abolitionists of their day, including William Lloyd Garrison and John Greenleaf Whittier, who wrote a poem at the Purvises dedicated to Harriet and her sisters.

In 1838 and 1839, Harriet attended the Anti-Slavery Convention of American Women, held in Philadelphia. In 1838 a mob surrounded the newly built Pennsylvania Hall, in which the meetings were held, and burned it to the ground. Later, when the managers of the hall sued the city of Philadelphia for the loss of the property, the city claimed that the abolitionists had incited the riots by mixing black and while delegates together. They gave as an example the fact of seeing a white man hand a black woman down from a carriage and escort her into the hall. Robert Purvis, who was of very light skin, realized that they were talking about himself and Harriet.

The Purvises were close friends of James and Lucretia Mott. In 1850, Harriet Forten accompanied Lucretia Mott on a trip to Central College in New York, Mott to give a speech, Harriet to visit her sons Robert and Joseph. Later, when first Joseph and then Robert died, Lucretia Mott spoke at their memorial services. Two sons, William and Robert are buried at the Byberry Meeting.

The Purvises sold their farm in 1874, and moved to Washington, where Robert had been appointed as commissioner of the Freedman’s Bank, to oversee its bankruptcy. The next year, Harriet died, and was buried in the Fair Hill burial ground in the family plot.

During the Civil War many blacks wanted to visit their sons who were training in the U. S. Army at Camp William Penn, on the farm of Lucretia Mott’s son-in-law, Edward M. Davis. The trolley conductors however forced them to sit in back, or even outside. The blacks mounted a protest, refusing to give up their seats. Harriet Purvis participated in this protest. One day in 1866 she tried to take a seat on the trolley car, and was ordered to ride outside. She decided to get off the car, and on her way she told the people sitting near the door how unfair she thought this was. “I was heard with respect,” she said. She expressed her feelings to the group around the door and was heard with respect. Due to protests like Harriet’s the streetcars were ordered to treat all passengers equally.